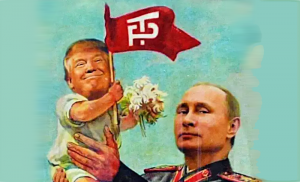 There are few things that President Vladimir V. Putin of Russia desires more than the weakening of NATO, the military alliance among the United States, Europe and Canada that has deterred Soviet and Russian aggression for 70 years.

Senior administration officials told The New York Times that several times over the course of 2018, Mr. Trump privately said he wanted to withdraw from the North Atlantic Treaty Organization. Current and former officials who support the alliance said they feared Mr. Trump could return to his threat as allied military spending continued to lag behind the goals the president had set.

In the days around a tumultuous NATO summit meeting last summer, they said, Mr. Trump told his top national security officials that he did not see the point of the military alliance, which he presented as a drain on the United States.

Quartz‘s Max de Haldevang explains the potential consequences of such a move:

A Europe without US support is militarily underfunded, unsure of its allies, wary of a genuine threat on its eastern border, and trying to hold itself together in the wake of the Brexit vote. So what are its options? We spoke to experts in Brussels, Berlin, London, and Washington to get an idea.

Right now Britain, Germany, and France account for 61% of the defense spending of NATO’s 27 European members. If this were a collection of businesses and you asked a management consultant what to do with those figures, there would be an obvious answer: create an unified European army, says Josef Janning, director of the Berlin office of the European Council of Foreign Relations. “You would actually merge, you would create an economy of scale,” he says. “That‘s what the Europeans are facing; they need a military of scale, with a procurement of scale, with a development of scale, and also with a policy of scale.”

However, an army like this would require changes to EU treaties. These changes would in turn have to pass through each of the 28 member states’ parliaments. No expert thinks that’s likely, given the unprecedented levels of skepticism on the continent currently towards the whole European project. That brings us to the next best option.

A move to leave NATO would also trigger a major legislative and judicial mess in the United States:

Trump would normally first need to win approval in the Senate and to persuade Republican senators that the move is necessary and in the US’s long-term security interests.

With Sen. Mitch McConnell (R-Vichy) lording over the Senate, there’s a possibility Trump could pull it off. And he might well have help from the courts:

Ultimately, a decision by the White House to abandon Nato could be challenged legally and end up in the US Supreme Court.

And with trump toadies Neil Gorsuch and Brett Kavanaugh in place, he might get his way.

We are seeing growing evidence that goes well beyond mollification of Putin. Trump and his fellow travelers are selling our nation out to a former KGB capo di tutti capi.

The occupant of the Oval Office must be removed.