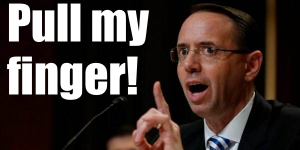 At very least, this is unethical.

At worst, it’s outright obstruction of justice — and it’s well beyond starting to look like it, given WaPo’s devastating Late Friday News Dump from reporters Matt Zapotosky, Josh Dawsey and Devlin Barrett:

The New York Times had just reported that — in the heated days after James B. Comey was fired as FBI director — the deputy attorney general had suggested wearing a wire to surreptitiously record President Trump. Now Trump, traveling in New York, was on the phone, eager for an explanation.

Rosenstein — who, by one account, had gotten teary-eyed just before the call in a meeting with Trump’s chief of staff — sought to defuse the volatile situation and assure the president he was on his team, according to people familiar with matter. He criticized the Times report, published in late September, and blamed it on former deputy FBI director Andrew McCabe, whose recollections formed its basis. Then he talked about special counsel Robert S. Mueller III’s investigation of Russia’s interference in the 2016 election and told the president he would make sure Trump was treated fairly, people familiar with the conversation said.

“I give the investigation credibility,” Rosenstein said, in the words of one administration official offering their own characterization of the call. “I can land the plane.”

Rosenstein’s actions have come under renewed scrutiny, as he has played a key role in releasing Mueller’s findings in a way even some of his supporters say has been overly favorable to Trump.

Trump ended the call with Rosenstein thinking he was “on the team after all,” one senior administration official said, adding that the president has been further swayed by Rosenstein’s deference in meetings and other settings.

On multiple occasions, according to people familiar with the matter, Rosenstein told Trump he was not a “target” of Mueller’s investigation — using law enforcement jargon that can refer to people about whom the Justice Department has gathered substantial evidence of criminal wrongdoing.

At best, Rosenstein comes across as a sycophant doing anything — including acts that are at very least ubnethical — to hang on th his job.

At worst, Rosenstein was a Loyal MAGA® Swamp Creature couching his responses in apparent neutrality while protecting his porn-star-bonking boss of bosses.

You had damn well better believe that there will be House hearings stemming from WaPo‘s yuuuge Friday get. The committees need to get their hands on several subpoena cannons.

Many of us who had been hoping that Rosenstein was a disinterested “white hat” are enraged. In fact, this writer believes the worst: the upper echelon of the Justice Department is under the control of corrupt swamp creatures, and their poster boys are William Barr and Rod Rosenstein. That particular Potomac bog will only be drained when Democrats reclaim the White House and both houses of Congress, expand and balance the top federal courts, and clean house at DOJ.

Here’s hoping Rosenstein lands that plane just outside of that office where he must surrender his law license.