Even as the NRA struggled to handle its internal divisions, an external threat emerged this weekend in the form of a new investigation by New York Attorney General Letitia James.

“The Office of New York State Attorney General Letitia James has launched an investigation related to the National Rifle Association (NRA),” a spokesperson for the attorney general told NPR. “As part of this investigation, the Attorney General has issued subpoenas. We will not have further comment at this time.”

The NRA has received a document preservation notice in connection with the investigation being undertaken by the New York attorney general, according to a source familiar with the matter. 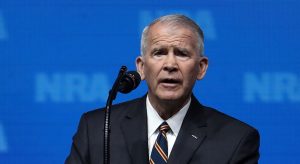 The NRA (Nefarious Russian Assets… er, National Rifle Association) is in complete meltdown as their annual convention concludes and at least two massive scandals unfold in front of the thousand or so attendees.

…announc[ing] Saturday that he will not serve a second term.

An NRA board member read a statement from North to members of the group, in which he announced that he wouldn’t be renominated, and recommended the group form a committee to review the NRA’s finances, The Associated Press reported.

North said there is a “clear crisis” that could threaten the gun rights group’s nonprofit status, The Wall Street Journal reported.

BREAKING: @NRA Board member reads a letter from Oliver North saying he has been forced out of the organization due to his allegations that NRA leaders engaged in financial improprieties. North’s term ends Monday. #NRAAM

It seems Wayne “Blood on my hands and goddamn proud of it” LaPierre, one of the most unctuous and corrosive lobbyists in the history of the nation, has accused North of extortion:

The NRA’s chief executive Wayne LaPierre wrote a letter to the board Thursday accusing North of plotting to remove him from the group by threatening to release to the board “damaging” information about LaPierre. He claimed Oliver North, a former Marine Corps lieutenant colonel perhaps best known for his role in the Iran-contra affair, was pressuring LaPierre to resign over alleged financial transgressions.

“Delivered by a member of our Board on behalf of his employer, the exhortation was simple: resign or there will be destructive allegations made against me and the NRA,” LaPierre wrote in the letter, which was published Friday by The Wall Street Journal.

The Wall Street Journal reports that North, who became NRA president last year, defended himself in his own letter to the board Thursday, indicating that his actions were “for the good of the NRA.” North previously wrote a longer letter to the board’s executive committee, alleging that LaPierre had made more than $200,000 of wardrobe purchases and charged them to a vendor.

We’re shocked that a lobbyist who puts the interest of the gun industry’s sales numbers above the lives of school children might have written off a closetful of bespoke suits that he can damn well afford.

As it turns out, “Tailorgate” may well be the least of the NRA’s problems:

The NRA filed a lawsuit against Ackerman McQueen this month in Virginia alleging that the firm had not been transparent in justifying its billings. In a statement to the Journal, Ackerman McQueen argued that it was complying and called the lawsuit “frivolous, inaccurate and intended to cause harm to the reputation of our company.”

The suit specifically mentions a contract between Ackerman McQueen and North, the Journal reports, who was hired by the agency last year to host an NRATV documentary program, which LaPierre says nets him “millions of dollars annually.”

LaPierre details a phone call between one of his staff members and North that took place Wednesday, in which North allegedly suggested Ackerman McQueen was prepared to release an “allegedly damaging letter to the entire NRA board.”

What? Both LaPierre and Colonel Oliver North, Amurrican Hero® might BOTH be lining their pockets at the expense of the NRA’s members?

Take a hint, America: this is typical K Street behavior, and now that the nation’s most influential pressure group is facing a very public “Knot’s Landing”-style catfight, it’s all but guaranteed that more dirty laundry will be spilled onto the pages of the nation’s broadsheets. Let’s hope the NRA’s rank-and-file read the bad news — and see they’ve been played for suckers to enhance the bank accounts of celebrity lobbyists.