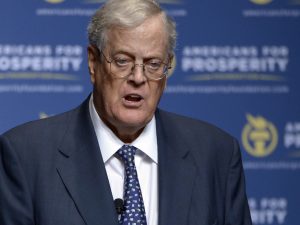 David Koch, billionaire conservative activist and philanthropist, has died. He was 79.

He and his brother, Charles, co-owned Koch Industries, a Nebraska-based energy and chemical company, since 1983. David stepped down from running the Koch organization last year due to declining health.

The Koch brothers helped to build a massive conservative network of donors for organizations that work to mobilize voters and sway elected officials in support of libertarian-leaning economic policies.

Bernie Sanders sums it all up quite nicely:

It is well known that the Koch brothers have provided the major source of funding to the Tea Party and want to repeal the Affordable Care Act.

What else do the Koch brothers want? … In 1980, David Koch ran as the Libertarian Party’s vice-presidential candidate in 1980.

Let’s take a look at the 1980 Libertarian Party platform.

“We urge the repeal of federal campaign finance laws, and the immediate abolition of the despotic Federal Election Commission.”

“We favor the abolition of Medicare and Medicaid programs.” …

“We favor the repeal of the fraudulent, virtually bankrupt, and increasingly oppressive Social Security system. Pending that repeal, participation in Social Security should be made voluntary.”

“We propose the abolition of the governmental Postal Service. The present system, in addition to being inefficient, encourages governmental surveillance of private correspondence.” …

“We support repeal of all law which impede the ability of any person to find employment, such as minimum wage laws.” …

“We support the repeal of all taxes on the income or property of private schools, whether profit or non-profit.”

“We support the abolition of the Environmental Protection Agency.”

“We support abolition of the Department of Energy.”

“We call for the dissolution of all government agencies concerned with transportation, including the Department of Transportation.”

“We demand the return of America’s railroad system to private ownership. We call for the privatization of the public roads and national highway system.”

If there was any lingering doubt that a tiny clique of fossil-fuel barons has captured America’s energy and environmental policies, it was dispelled last week, when the Trump Administration withdrew from the Paris climate accord. … As the climate scientist Michael Mann put it to me in my book “Dark Money,” when attempting to explain why the Republican Party has moved in the opposite direction from virtually the rest of the world, “We are talking about a direct challenge to the most powerful industry that has ever existed on the face of the Earth. There’s no depth to which they’re unwilling to sink to challenge anything threatening their interests.” For most of the world’s population, the costs of inaction on climate change far outweigh that of action. But for the fossil-fuel industry, he said, “It’s like the switch from whale oil in the nineteenth century. They’re fighting to maintain the status quo, no matter how dumb.” … As the [New York] Times noted, Republican lawmakers’ swerves to the right on climate issues “did not happen by themselves. Republican lawmakers were moved along by a campaign carefully crafted by fossil-fuel industry players, most notably Charles D. and David H. Koch, the Kansas-based billionaires who run a chain of refineries. . . .”

Talk about perfect timing: the death of one half of the two poster children for unbridled, rapacious greed comes on the same day that a new book about their caustic legacy hits market:

If there is any lingering uncertainty that the Koch brothers are the primary sponsors of climate-change doubt in the United States, it ought to be put to rest by the publication of “Kochland: The Secret History of Koch Industries and Corporate Power in America,” by the business reporter Christopher Leonard. This seven-hundred-and-four-page tome doesn’t break much new political ground, but it shows the extraordinary behind-the-scenes influence that Charles and David Koch have exerted to cripple government action on climate change. …

While “Kochland” is more focussed on business than on politics, in line with Leonard’s “The Meat Racket: The Secret Takeover of America’s Food Business,” from 2014, it nonetheless adds new details about the ways in which the brothers have leveraged their fortune to capture American politics. Leonard shows that the Kochs’ political motives are both ideological, as hardcore free-market libertarians, and self-interested, serving their fossil-fuel-enriched bottom line. The Kochs’ secret sauce, as Leonard describes it, has been a penchant for long-term planning, patience, and flexibility; a relentless pursuit of profit; and the control that comes from owning some eighty per cent of their business empire themselves, without interference from stockholders or virtually anyone else.

Burn in hell, Dvaid Koch, and say hello to Jerry Falwell, Phyllis Schlafly, and Dick Nixon for all of us!